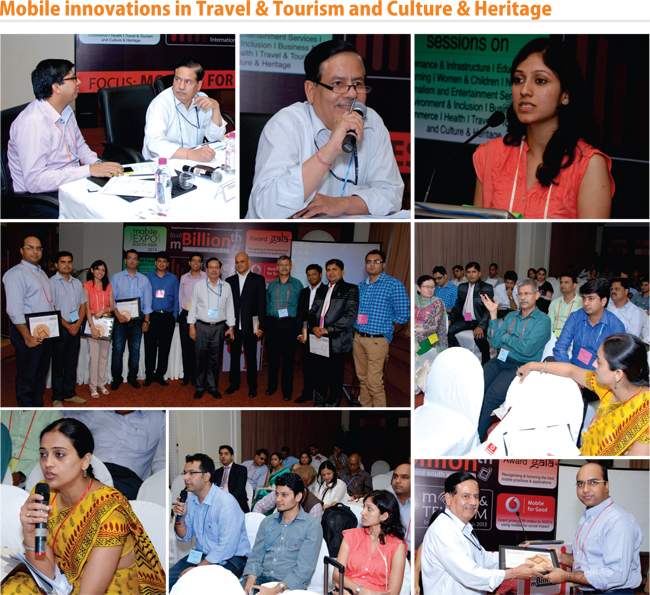 The first speaker of the session was Sumeeta Jalan who explained that My Indieyewas started with the objective of showcasing India to the world. The founder went outside India to see how India is perceived in other nations. The problem that the government is facing is that there is a shortage of tour guides in most places. The app works as a tour guide and bridge the gap between people and the cultural heritage. It’s available only on the android market. India is a beautiful country to be showed to people and this app will not only help the tourists but also the Indian population that wants to know about its own culture and heritage. It’s a good way to create a sense of Nationality among the people.

The second speaker of the session was Yogendra Singh from Vastu Compass.Vastu Compass gives you the information by which you might learn on how to build your house, so that it will bring prosperity to the family. He talked about the key points of the app like the ease with which you can add and drop the items of your house and the app will determine in what direction that item should be facing. It’s a really ancient science, which is very much prominent in many households.  This science is hard to understand from books; therefore the app gives the end users a way to learn the implementation of the science.

The third speaker Mahendra A. Sharma, Gujarati Pridestarted with a joke saying that everyone wants to come to Delhi, so he also came for some opportunities. They wanted to impress everyone by making something that could be used by people of any age. Everything is stagnant in life, only love is ageless. The app was started with intention of showing love and life after love. The first thing that they launched was GujratiShayri. They started with the Gujratiebooks that became really a revelation. Gujrati pride has become a brand which the founder was really proud of. It’s a free app and they aim to bring Gujrati flavours to all over the world. It’s an effort to make sure that the language literature and the culture survive.

The fourth speaker Pranav from Make my trip said that in India, out of a population of about 1.2 billion only 50 million people use smartphones. The travel solutions are generally build only for them and nobody is thinking about the other population that doesn’t use smartphones. Make my trip has started providing services via SMS to target more consumers. If you visit a place and want to know what places to visit and stuff, make my trip provides that. They give VISA solutions. They have started bus booking via SMS. In India we have 4300 cities and only 92 have airport, therefore you always need a planner on bus services, train services, what routes to take and make my trip provides that. As there is a delay in bus and train services many of the times they are working on launching a near real time planner which keeps the track of delays as well.

The fifth speaker, Satyajeet Singh from Clear trip started with the simple motto of making travel simple and more convenient. They believe that time is money and the app should be as user friendly as possible. They have tried to make a UI in which a keyboard is used as less as possible and interestingly you can book a flight by just typing ‘cvv’ and nothing else. They provide a log of your previous travels. The app is more localised when it is used in other countries. They make an effort to make the app very localised so that people like using the app. The app provides a split screen experience which is rare.

The sixth speaker of the session was Chetan Temkar, Smartshehar who wanted to do something big in a sector that was relatively new and that was mobile. He started off with a target of 1 lakh users in 2 years. He started a bus app in Mumbai, which was tough to do as no one actually knew where the buses go etc. So they went to every bus stop and marked the coordinates on a GPS. It works in real time. For example if you are standing on a bus stop and you don’t have time to type the place and stuff, the app will tell you which buses are coming and just by clicking on the bus it will tell you the route of the bus which is pretty helpful. After the success of the bus app they started an auto app and a train app which is the most popular now. They build an app for providing safety, so as soon as you press a button, it clicks a photo and sends it to your emergency contact no.

The next speaker Bhavish Aggarwal from Olacabs explained that Commuting in India is a pain so they want to make an app that revolutionises the way we travel. The app is available on windows android and IOs. The app lists the nearby cabs and we can choose whichever is most suitable to us. As there used to be no transparency in the cab services, the app provides us with a way to keep a track of the location of the cab. We can sit in the cab leave at our destination without paying any money, because they know that we have taken a trip for so and so money and the same could be provided later by a credit card or net banking. They aggregate cars rather than owning them.