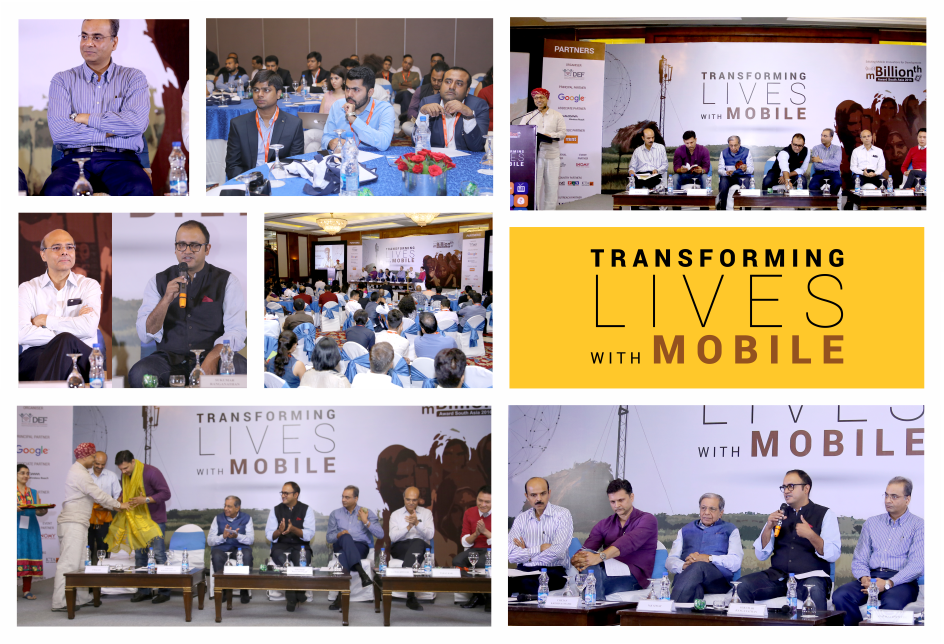 On July 23, 2016, about 300 people gathered at Eros Hotel, Nehru Place, to celebrate innovative mobile solutions in South Asia. Organised and hosted by Digital Empowerment Foundation (DEF) in partnership with Google and Qualcomm, the 7th mBillionth Awards was held with much fervor to recognise some of the best initiatives being taken in the telecom industry with a vision for mass development through ICT.

This year, the mBillionth Awards received 348 entries from India, Afghanistan Pakistan, Sri Lanka, Malvides, Bangladesh, Bhutan, Nepal. Out of these, 69 were shortlisted as Finalists. Twenty-five initiatives were awarded as Winners across 10 categories while six others received the Jurors’ Mention at mBillionth Awards Gala on July 23rd. A complete list of winners can be seen here.

Keynote speaker and Founder of Goonj, Anshu Gupta addressed the innovators in the evening and motivated them to focus on innovations that affect rural lives and not just urban alone. Making cabs available at the touch of a thumb and products of the mall in your palm is not development unless health, education, financial security, social security, water, land and food should reach every individual.

“It was the seventh year of Manthan Awards when we decided that we had to create a separate platform for mobile innovations; and it could no longer be a part of the parent award simply due to the massive number of entries we began to receive in the mobile catrgory. Today, mBillionth Awards receive more nominations than Manthan,” said Manzar.

“At mBillionth Awards, we try to focus on innovators at the early stage. We awarded Ola and RedBus when they were known only by a handful of people. We recognised Paytm when it was more commonly known as One97. India Hunt, Rang De, The Better India have all been the past winners of our award platforms,” he added.

Noting that India has a mobile penetration of one billion mobile SIM cards (and 600-700 million unique mobile users), he stated that 72 per cent women do not have access to mobile phones. mBillionth Awards, thus, envisions a day when unique mobile subscription touches one billion, and percentage of women mobile users rising considerably.

Ranganathan, however, was skeptical of even the one-billion figure and said that we should take these numbers with a pinch of salt. “While the numbers are growing, I wonder if there are anywhere close to what they ought to be,” he said, adding that we all know technology transforms lives but do we have the right business models, the right technological infrastructure, and the right regulations and policies in place.

Commenting on this, Singh said the central theme for India’s reforms has been the paradigm change in regulations. “During the 1990s, it was a bad phase for a lot of companies and the telecom industry; however, we had a prime minister [AB Vajpayee] who took the right view. On the matter and the moral hazards associated with it,” Singh said, adding that soon after that period India moved from the budget freeze to revenue sharing system; and the old TRAI Act (Telecom Regulatory Authority of India) was replaced with a new TRAI framework.

Singh pointed out that, unfortunately, regimes had been working until recently with the mindset of using Internet and spectrum penetration for fostering economic growth rather inclusion being the primary theme. “High Internet connectivity reflects high GDP, but is that the route we should take?” he asked referring to the auction-related frauds during the Congress’ regime.

“Equipping ourselves to the fast-pace changes is the need of the hour, and it is a difficult challenge,” Krishnaswamy noted, and added that there is a need to be technologically neutral, to be flexible, to have a bottom-up approach towards policy making, and to periodically imbibe the fast pace changes happening the field of technology.

He also applauded young bureaucrats who have realised the importance and reach of digital technology and social media tools. “There is also a need to learn from global best practices. Every individual is bringing about a certain degree of change. There are these constant challenges that the regulators needs to face. The present government at least recognises mobile as a critical component of India’s growth,” Krishnaswamu added.

“In the first nine months of 2015, the investment in the mobile phone industry was $25 million. This investment had outstripped the investment of the previous two years. This is the kind of excitement that the sector is generating,” he pointed out.

Adding to this, Dwivedi said, “Today, not only is the best mobile environment available to everybody, but the people should also be able to use the mobile in the most effective manner that the government is trying to introduce. Digital literacy is as important as digital infrastructure. Besides, it’s not only the Department of Telecom and IT but efforts are being made by all departments to ensure that they create an environment to allow demands while the government takes care of the supply side”

With over 101 crore Indians registered with Aadhaar, it has become easy to reach out and target the maximum number of Indians through various schemes, and see whether or not they are availing the benefits, Dwivedi added.

Schemes like the Jan Dhan and apps like Umang are empowering the community, and making services reach the beneficiary. Today, people are able to transfer money and the government is able to ensure direct beneficiary transfers simply through mobile technology. The National Digital Literacy Mission and the National Optic Fibre Network has managed to connect lakhs of individuals and thousands of panchayats, respectively. Then there are government initiatives with private firms — such as Google’s Loon Project and rail station Wi-Fi project — that are making India towards inclusion.

However, there are areas where the government is restricting inclusion as well without a proper thought to its regulations.

“Earlier this year, the urban development ministry said no mobile towers can come up in residential areas. It took us four months to get the whole thing repealed for the benefit of the consumers. Imagine citizens not getting any network in their houses!” Balaji said, adding that policy making should include the government, innovators, ISPs and citizens.

Moving from the urban landscape to rural, Kar pointed out that with the present askew ratio of urban Internet users vs rural Internet users, “If the network is not reached out to rural India, then it would be difficult for farmers to access various services that can help improve their livelihood.”

However, cost of spectrum is a major issue for ISPs to penetrate into rural India where the number of subscribers or their consumption isn’t enough to recover the cost. “Spectrum auction is the most transparent way but the design of the auctions needs to be transformed,” Kar noted.

Bringing in a little perspective from our neighbouring country Bhutan, Jamyang said, “Bhutan has a population of 7,00,000 people and we entered the telecom industry quite late. In fact, the first mobile tower was set in 2003 and a second operator came into the market in 2008. So we were able to avoid the impact of the 2001 collapse of Internet companies. Revenue versus reach in telecommunication policies resonates in Bhutan. However, we are still at a very early stage, trying to reap the benefits of mobile technology. We continue to learn from the mistakes and best practices of other countries.”

Until a few years ago, there was less than 3 per cent broadband penetration in Bhutan. Today, there is 35 per cent Internet connectivity, courtesy mobile Internet.

“Mobile phones have really changed the lives of people in so many ways. Even before apps became mainstay in people’s lives, just being able to carry out instant communication was a big deal in Bhutan. And now e-banking and e-health are changing the scenario,” Jamyang added.

Innovators can take a look at the photos from the event here and access the mBillionth Awards Book 2016 here.