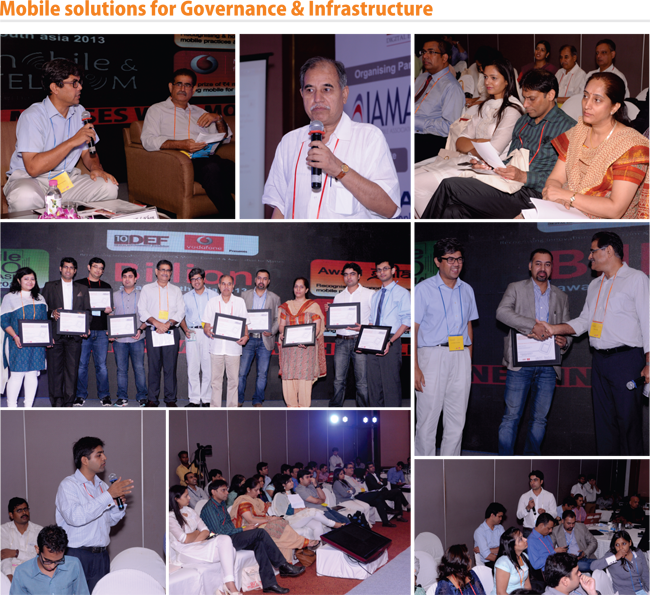 To utilize the penetration of Mobile Services by providing solutions in the field of Governance and Infrastructure thereby strengthening the governance structure and service delivery mechanism.

The first speaker of the day, Mr Narendra Saini shared details of a device named “Silent Observer” which can be installed on a sonography machine to record information about each sonography test including details of the patients to curb the menace of female foeticidethereby increasing the sex ratio. Even minute details such as when the machine was switched on, location of the machine where it was used etc. can be recorded. The devices were GSM and GPRS enabled and hence sensitive information was stored in a remote server. More than 500 such devices were installed in the district of Kolhapur with the support of Distt. Collector and results indicated towards increase in sex-ratio.

The second speaker Mr. Hemant Upadhyay  from VOICE showcased his app called NCHMobiAPPwhich was developed to address consumer complaints including but not limited to public utility services such as gas, electricity .  An algorithm was developed which enables the user of the app to get an automated response to his issue relating to consumer affairs.NCHMobiAPP could go a long way in empowering the consumers.

The third speaker Ms. Kavita Bhatia from DEITY shared Government of India’s initiative called Mobile Seva with the audience. Mobile Seva provides mobile solutions for issues relating to governance and brings efficiency and simplifies procedure.  Ms. Kavita shared details of the App Store where more than 150 apps are available. These apps range from Election Commission of India’s EVM tracking to Health and treatments.  Some apps also facilitate citizen to citizen communication thereby enabling citizens dealing with same issues to share their experiences.  Over 48000 Apps have been downloaded through Government’s Mobile Seva Initiative.

The fourth speaker Ms Ruchira Chaturvedi from Voice RTI, Mumbai Votes showcased their venture-MumbaiVotes.com which lets citizens keep track of their MPs, MLAs and Corporators through vast database of profiles, interviews, newspaperclippings, manifestos etc. Citizens can call on a specific number and ask a query to an MP, MLA etc which is then recorded and posted on Mumbaivotes and is accessible by other citizens. Ms Chandrika explained that the inherent problems of RTI such as inability of an illiterate citizen to seek information and requisite knowledge of drafting an RTI application is absent in the model propagated by MumbaiVotes thereby enabling every citizen whether literate or not to put up questions to his elected leader.

The fifth speaker Mr Girish Chaturvedi from netCore, told the audience about the Mobile Voice Campaign which was conducted in collaboration with Maharashtra Pollution Control Board. This tactical campaign recorded voices of Mr. Prithvi raj Chauhan (Chief Minister of Maharashtra) and other leaders to send out a message to go green, avoid using crackers on Diwali and minimize the wastage of water during the festivities of Holi which helped contain sound and water pollution.MrGirish claimed that there was a tremendous response to these campaigns. Diwali 2012 was considered to be a quiet one and campaign results also show a sharp decline in use of water during Holi 2013.

The sixth speaker, Mr Partha Chakraborty, Directorate of IT, Govt of Maharashtra, explained to the audience that even though mobile has been able to penetrate to the common man to a certain extent, the number of smart phone users is still low. Similarly, internet broadband penetration was claimed by the speaker to be at 12%. Bearing it in mind, the Government of Maharashtra, via Mahaonline has developed a SMS gateway for Push and Pull type SMS services integration with various department s such as  State Excise , e-pani application etc. It offers push data sms service i.e. sent to respective end user from application or web-service through sms, as well as pull data service, i.e. data received from various end users through sms.

The seventh speaker, Mr Ravi Vyas showcased APPWrapper which creates new ad-inventory.  The application ‘AppWrapper‘ comes out to be the simplest app monetization platform. This application combines both the models of a usual app the free Ad based version and an Ad free paid version so the developer doesn’t have to worry about different version and it also gives user an option to choose on how to pay back the developer. What the AppWrapper does is it converts your developed app into an app with ads in basic terms. The ad can be anything ranging from a jigsaw puzzle to normal banner ads or video ads. The best thing about this is that it not only helps the smartphone developers but also the normal feature phone developers and has helped change fortune of many developers around the globe.

The next speaker was Mr. Deepak Jharodia, the developer of App called India Against Spam explained that with the telecom revolution and reduction in price of call rates, spam calls and spam SMSs increased significantly. TRAI in their endeavour to curb the menace introduced the  Do Not Disturb service where victims of Spam calls were to send details of spam calls by SMS in a specific complex format which was different for different mobile operators. Mr. Deepak explained that India Against Spam, a free application bearing no advertisements enables the app users to select the spam message/call from their call log, automatically recognizes their network operator and sends the message in the TRAI-prescribed format by itself.

Mr. Aditya Vashishta from IVR Junction, Microsoft Research told the audience about open source IVR Junction which has been deployed in Somaliland which is inhabited by a lot of tribals and bears extremely low internet penetration.  Aditya explained to the audience about the gap which exists between political superiors and a common man. In order to facilitate discussion between the political class and rural tribal population, IVR Junction has enabled a live audio and video discussion forum  where more than 6000 posts were received by  interactive voice response system in four months.This initiative allows cellphone users from marginalized or rural group to post voice messages that can also be accessed by other users anywhere in the world who have smartphones or laptops essentially creating a two way communication.  This in turn promotes people’s participation in governance.

Summary of the session:
Various presenters showcased their solutions to problems relating to governance and infrastructure. Solutions were provided on a very wide range of issues such as female foeticide, accountability of politicians, unwanted spam calls and text messages, environmental pollution, status of applications submitted to public authorities like driving license, public participation in governance etc. The Chair and Moderator unanimously appreciated the efforts of organizations and expressed belief in the potential of Mobiles to provide solutions for governance & Infrastructure.