For past three years, these awards have witnessed participants from not only all over India but also from all across South East Asia. The mass-reach effect of mBillionth Awards could be evaluated from the fact that the third edition of the awards saw 253 entries in as many as 9 categories. These categories ranged from m-inclusion to m-commerce and m-travel and tourism to m-entertainment. 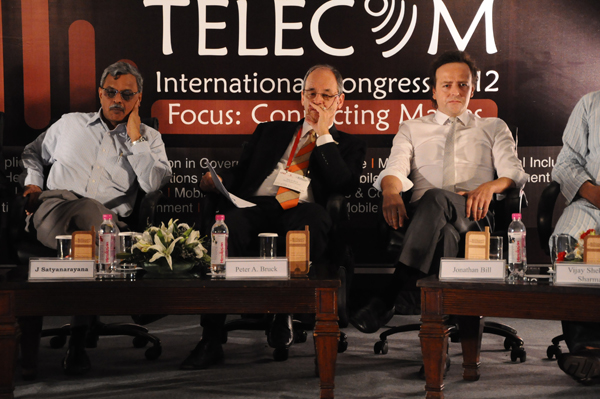 Responsible people know the worth of time of both theirs and that of others.
Very rightly did Mr. Osama Manzar, President, Digital Empowerment Foundation kick-started the event sharp at 9:30am. Instead of a monotone introductory speech, Mr. Manzar preferred showcasing a video as his medium to familiarize every one with the mBillionth Awards.

First guest to take the dice was Mr. Amir Ullah Khan, Deputy Director, BillandMelinda Gates Foundation. The very first point that Mr. Khan touched upon in his presentation was ‘financial inclusion for poor’. He pointed out that in a country like India, as many as 90% of the poor live in the absence of formal banking system. In the agrarian sector, this greatly hampers the risk taking ability of the poor. Thus they are forced to move to informal systems of banking which certainly do more harm than good. This undisputedly demands for developing ways and means through which cost of financial shocks can be reduced for the poor. Mr. Khan also pointed out the reasons as to why banks don’t cater to the poor. Main reason behind this was higher transactional costs for the banks to serve the poor. According to him, it was only through mobile technology that this problem could be solved. He urged banks to come up with innovations, which would reduce the transactional costs for banks, while still enabling the poor in small denominations.

The message of financial inclusion for poor was followed by an unending praise of mobile phone technology by Mr. R Sukumar, Editor, Mint. Mr. Sukumar started with a small anecdote. As he recalls, a few months back he was coming down from his office through elevator, when he received a Twitter update that the founder of NSE had passed away. He instantly called up his Mumbai office editor to find out that the news was confirmed. While people would call it a mere co-incidence, he calls it the power of mobile technology.

Mr. Sukumar views problems in India with a rather different perspective i.e. lack of access. He is a critic of providing things free of cost to solve this problem though and firmly believes that issues must be handled in an entrepreneurial way rather. “People are ready to pay for what they need”, he justifies. An ardent supporter of the mobile technology, he claims that Indians are in an interesting phase of the development of mobile technology when the hierarchy of information sharing is breaking down.

The next speaker, Prof. Peter Bruck, Chairman, World Summit Award, Austria,  even further glorified the sheer patriotism of Mr. Sukumar for mobile technology. “Mobile is the most important thing that has come to India in a long-long time”, professor remarked with a certain glow in his eyes. Professor then made a reference to 2005-06 round table conference of United Nations that was conducted with an agenda to deal with the “digital divide” all across the globe. He further classified the types of divides that existed; namely divide of access, divide of cost, divide of skill, divide of usage and that of content. Stressing on more on the divide of content, he said that infrastructure doesn’t have much role to play if it is not accompanied with the right content.

Mr. Bruck gave a very interesting viewpoint on the mobile technology then. He said that human civilization had lived without any sorts of media for more than 1 million years and with unresponsive med (mainly print media) for almost 10,000 years. And it was only in the last 20 years that the human kind has seen some interactive media in terms of mobile communication technology. Mobile technology has its special space because it has allowed us to escape the oral narrative style of communication and enter the knowledge based interactive space of communicating. Elaborating upon the importance of the mBillionth awards, he said that these awards are a medium to check the quality of content in this space so that only superior content is being circulated in the media. Professor ended his interaction by gifting a jewel box to Mr. J Satyanarayan.

Mr. Manzar then introduced Mr. Vijay Shekhar Sharma, Founder, One97 Communications. Mr. Sharma started by saying that a century ago the privilege of content creation and content access was a privileged right for only few people. With the advent of Internet the barrier of content creation broke down and now m-technology has already started its mission to end the problem of content access. With great optimism and excitement he prophesized that in the next 18-24 months times will change and mobile technology will reach newer avenues.

Mr. Sharma also pointed out as to how mobile was not just one medium of communication but rather a platform where content creation and access went on simultaneously. His eyes lit with rather enthusiasm as he hoped for a future where no physical infrastructure was required anymore. Everything could flow in through the space of mobile technology.

After Mr. Sharma, it was turn of Jonathan Bill, Senior Vice President, Business Development and Innovation, Vodafone India to take the dice. In his very first remark, Mr. Bill referred to reports that say that internet usage through desktop computers is continuously falling and the market for mobile internet usage is witnessing an upward trend. Referring to the statistics from web browser giant Opera, he said that in past 6 months, 46% of its users had accesses internet through mobile phones only. He further went on to say that although India had huge potential for skill development in this field, market is suffering from the issues of user experience paucity.

Mr. Bill recognized 5 challenges for Indian mobile industry namely, a. low return on investment, b. business model evolution, c. IP protection, d. finance and e. Language complexity. This calls for concrete efforts in terms of innovation and entrepreneurship. Nonetheless, Mr. Bill proposed that India was soon going to be the second largest market for mobile technology though its revenues were still nowhere to be compared with that of other models.

Next, Mr. Tomi T. Ahonen, Author, Consultant & Motivational Speaker, Hong Kong, the Inaugural’s Session’s penultimate speaker was invited to the dice for his address. He instantly lightened up the atmosphere by explaining as to how Finland was closely related with mobile history through the likes of Nokia and Rovio. Mr. Ahonen then shared his in-depth analysis of the Indian smartphone market. Tomi said that in India even today the currently installed base space is still Symbian. He further explained that the current non- smartphone market has major opportunities for data based services and not application-based services. Even the smartphone market had a major chunk of applications dedicated to businesses only and not consumers.

Still he insisted with solidarity, that this is the best time for Indian mobile entrepreneurs. He conveyed that one needs to be persistent with efforts and never willing to leave the challenge. Moreover, he says, that Indian entrepreneurs must acquaint themselves with all the business models existing in the mobile industry. These can be listed as follows:

He concluded by wishing all the exhibitors and participants all the best for their future.

The last panelist for the session was esteemed Mr. J Satyanarayan, Secretary, DeitY, Ministry of C&IT, Govt. of India. Mr. Satyanarayan stated that digital divide was a correct idiom for the problem of communication a few years ago but not today. Today this divide has extended its definition and has become the Digital Dividend Divide. This is more or less because people are not able to leverage the benefits of technology. As mobile industry increase to almost 1 billion users in near future, the problem of divide needs immediate attention.

He stated content, connectivity, capacity and competition as 4 challenges for the mobile industries. In terms of content, he said, we need to get information that makes economic sense to people, is affordable, is in local language and addresses to the problems of illiterate. Referring to connectivity as a major hindrance for rural areas, he assured the government agencies are trying their best. And as far as capacity building was concerned, enabling people and making the masses aware about technology was not possible without it. Mr. Satyanarayan concluded by saying that all players in the mobile industry had to compete in a way that their actions were in sync with the larger good of people.