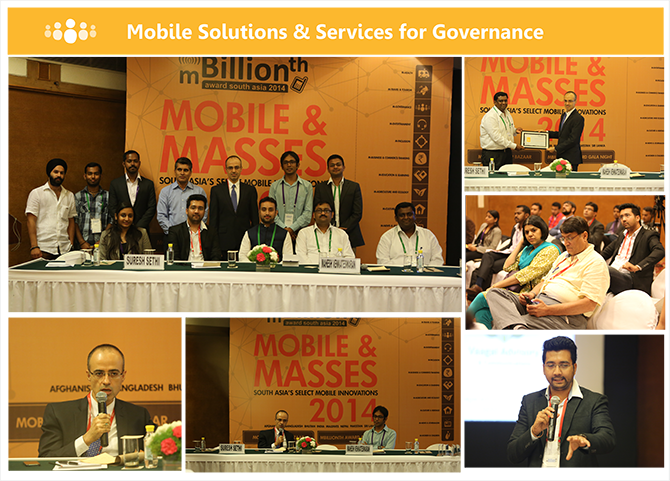 1. Labor Permit via DOFE, Nepal: 3000 workers from Nepal, go abroad everyday. Almost all of them face a multitude of problems related to safe migration. While most depend on agents, many also have to go to Kathmandu for the requisite information. The problems that they face range from being charged more, getting lesser salary or different jobs than promised by the agents, getting non-legal permits etc. The idea of an SMS service to provide all the requisite information rides on the facts that Nepal has a vastly diverse topography with 75% mobile penetration. The simple process involves sending the Passport number to a particular mobile number. In response, he/she will get all the information at the cost of Rs. 2, complete with the exact payment he/she will be receiving. In just one year, more than 1 million citizens have used this service. Some workers, on getting the exact information have also withdrawn from the process and saved themselves from trafficking and other unwanted surprises.

2. Next Drop, India: While only one city (Jamshedpur) in the entire country receives 24-hour water supply, all the other cities have to face the uncertainties of one or two hours of water supply that they get. To curb this uncertainty and malfunctions, NextDrop involves valve-men by giving them numbers on which they call one hour before water supply starts. Citizens also have the numbers and can respond if the supply is not on time or any other anomaly like leakage found. With the location of the citizen pre-known, the problems are being fixed within 30 minutes. With maintained supply time charts, and live water supply maps, such problem recurring with particular areas can be solved.
Almost 800 families have been connected and benefitted by NextDrop.

3. Jana Online, I Change My City, India: Jana online aims at improving the quality of life in the ‘well run cities’ of India. It is an online platform to lodge complaints with this ‘portal’. While the other citizens can see the complaints and if they associate with it, may ‘vote up’ the comment. Also, they can provide suggestions on the issue. All this is later passed to the respective government and bureaucrats. The citizens who are sharing their problems are called as ‘Champions of Change’.
With about 10k downloads, the portal has registered 10,970 complaints with more than 50% of them already fixed. The app also supports another feature called ‘I paid a bribe’, aimed to retain corruption.

4. Passport Seva, India: Due to continuously growing demand for passports and limited reach, to enhance scalability, ministry of external affairs in public private partnership, has provided and app to provide real time statuses. Thus while keeping the status of passports at everybody’s fingertips; the app aims to provide accessibility and timeliness. The app utilizes the fact that with the enhancement of range, the age of terminals has modified itself entirely to become age of mobiles. This is being used in turn to enhance mobility in eGovernance, resulting in convenience.
While the app was launched in March 2013, SMS service was launched in November of the same year. The app further aims to come up with features like police verification etc.

5. Citizen’s Connect–SMC Mobile App, India: Surat, while being the oldest municipality of the country, is its 8th largest city and the economical hub of Gujarat. With an aim to interact directly with the citizens, eGovernance in Surat started way back in 1979. That start has led itself to transform into a full-fledged single window app with 42000 downloads.
To serve the approximately 4.5 million population of the city, the app while providing a single source of all data ranging from rainfall, water let from the nearest dam, cost of various commodities, public notices, vaccinations, recruitments etc. it also is the platform to pay several kinds of taxes and more than 100 transactions, provide birth and death certificates, licenses, complaint forum. The app also has features like GPS, flash light, strobe light, ‘I am safe’ button,

6. Call for Change, India: Call for Change ran a pilot in Chennai for two weeks, attracting 3000 calls. This is a missed call service in which the caller is then called back. The caller then gets to register his problems, complaints and other civic concerns in voice calls, which are recorded. This concern, when uploaded can be heard by other citizens who can provide suggestions and ideas which are vote-able. The name, problem, location and type of problem of each caller are recorded. The website integration registers all the complaints and suggestions which are then taken to the bureaucrats and MPs of the area.
With the two week test being successful, the app now aims to expand its reach and provide facebook integration while doing so.

While Mr. Mahesh praised the various projects and complimented the system integration of government and citizens via social media in seamless fashion using cloud sourcing, he expressed his concerns over the increasing security threats thus arising.

Mr. Suresh congratulated everyone on their presentations and ideas which leveraged mobiles and complimented on the paradigm shifting achievements of the applications. Claiming India to be the inventor of missed calls, he expressed surprise that entire series of transactions are being triggered by mere missed calls and SMSs providing full information. Being from the banking sector himself, he also praised the popularizing concept of mobile wallet among others.