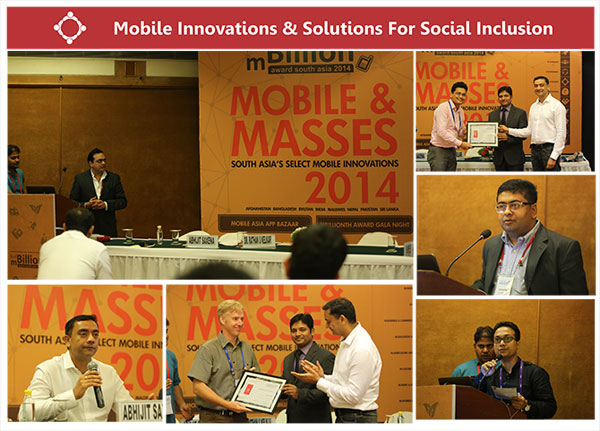 1. Halaat-o-Meter, Pakistan: The idea for Halaat-o-meter comes from Netherland where similar application is used to keep tabs on the changing weather. The idea was then molded for Pakistan to post situations concerning safety and problems.
People can post situations ranging from traffic jams to blasts. If many people report similar concerns, the area on the GPS map on the app becomes darker. Thus the app integrates both Google maps and facebook to help people stir away from troubled areas.
Currently, the app is only in android and web application formats and aims to expand soon.

2. Mobile App for Differently-abled Citizens (Accessible Places), India: Accessible places, currently working in the state Maharashtra, is for the continuously rising number of 2.7 crore disabled people in the state. Owing to the good penetration of smart phones, the app depends on people to click and upload information of places accessible to, or made especially for disabled people; and then tag them to the their respective GPS coordinates. The rich data thus formed, can help the disabled to navigate places with much more ease and search places that are accessible to them.
With the app launched on 27th of February, it has been downloaded 441 times and has 50 accessible places added on its database. Also, in the future, the app will also be voice enabled so as to help the visually challenged.

3. Bhasha Helakuru, Sri Lanka With an overall population of over 20 million people, Sri Lanka also has 100% mobile penetration. Of these 20 million, 74% are Sinhalese with only 10% of these understanding English. This results in 13.3 million Sinhalese who use their phones only for calls any thus can’t use internet, SMS, applications etc.
Bhasha Helakuru started Sinhalese rendering of phones about 3 years ago by which they can see all the content on their phones in Sinhala. The new extension however, can be used for writing Sinhalese with help of phonetic typing. The app also provides paid extension for word prediction.
The app has been downloaded almost 500000 times. Also the app can be made for any other language in 2-3 months.

4. sZenseEYE, India sZenseEYE is an application to help the blind to interact with their surroundings and help in navigation which is very difficult for them without any aid. The app leverages the camera of the phones by equipping them to identify the collision-able places and their distances from the person. This information is provided to the sensors of the goggles on the eyes of the individual. The goggles point to the direction of the obstacle by vibrating accordingly on the eight points on the goggles.
The camera takes picture of what is in front of the phone. Now, this photo goes through the algorithm and thus decides what all are the possible obstacles. The algorithm then again works on the acquired data and decides the vibrations on the goggles.
The app is currently working to access depth for example of a water filled pit, and for obstacle sideways, like cars coming on sides.

5. Walkability App, India While walking is an important part of our lives, due to poor urban planning, lack of enforcement of laws and pollution, the same has become extremely difficult. Infact, there are almost 400 road deaths everyday due to lack of walk-ability for e.g. Non-availability of footpaths.
Walkability survey app provides citizens opportunity to score out of 100 and them on the GPS maps. Thus the unsafe regions develop a lower average rating on the maps.
The app is working in 107 cities in 28 countries in 5 continents and is thus while providing data to the citizens for safe venturing in the cities so that they may steer away from such places at night or at times of high traffic, is also providing data to the concerned authorities.

6. Anant Cloud Computing Platform, IndiaWith the varied requirements of the people in India, the problem of app developers is increasing continuously. While making applications, they have to make the same for the multiple languages spoken in India and for the various platforms on which they would be running i.e. Android, iOS, Windows, Blackberry, etc. Thus to enhance the reach of the apps, the developers face a mammoth task of replicating the app in the above mentioned variants.
Anant cloud computing platform runs on only Java script and thus runs on all devices. Thus it can be used to develop any app in multiple configurations. The app is cloud sourced and thus can be used directly. Also changes made online are added to platform whenever connectivity is achieved. The app thus developed will work on every platform.
This platform is free to be used.

7. Lokrajya Mobile App, India Lokrajya Mobile app consists of more than 14000 subscriptions of the popular magazine Lokrajya published in Maharashtra. The magazine has been published since 1947 and almost all the aspect of life ranging from politics, sports, lifestyle, news, concurrent thoughts etc.
Thus the app includes everything about Maharashtra since 1947. Also the app shows rich information of the world then and thus showcases the way Maharashtra and the world had been and is changing. While being launched in February, 2014, the app has already been downloaded 6600 times.

While, while judging the apps we did have some knowledge of the apps, the understanding has expanded. Mobile penetration and its effect are enormous and a lot can be done in this direction.

Scalability of these ideas is a definite issue. Also the major problem is the fact that not all the apps can be working with the government. Policy about mobile governance between government and private entities is a lot less. Thus, ‘How to standardize these transactions’ is a big issue. Also lack of G2G app needs to be looked into.