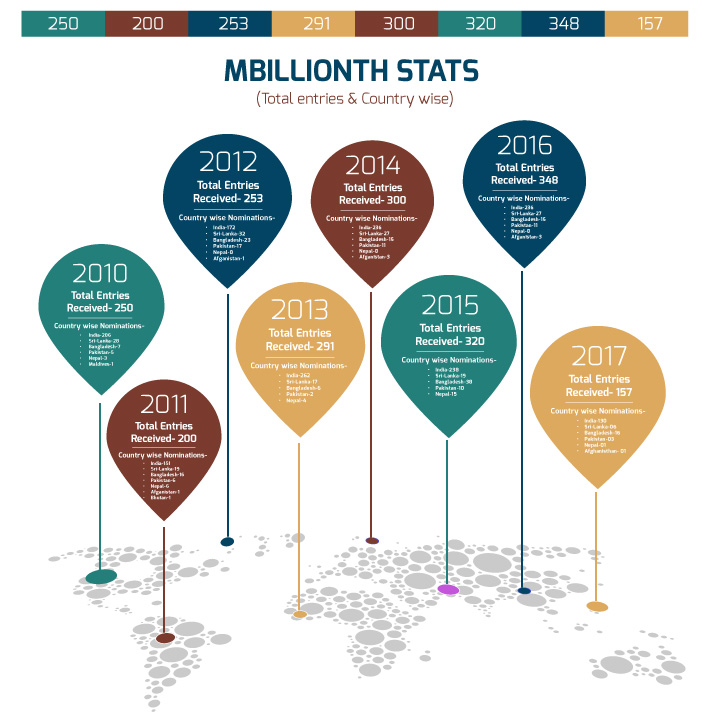 With the rapid increase in penetration of mobile technology across almost all socio-economic strata around the world, the mobile phone has emerged as the most powerful digital tool for empowerment across the world. This is more so in South Asia, Asia Pacific and other parts of the developing world.

Recognising this phenomenon, in 2010 the Digital Empowerment Foundation (DEF) spun off from its highly successful Manthan Awards a separate award – the mBillionth Award South Asia – only for recognising excellence in mobile innovations for development.

The industry‐driven and peer‐acknowledged mBillionth Awards acknowledge South Asia as a key hub of the world’s mobile and telecom market in terms of penetration and innovation. The region, however, suffers from a significant digital divide. These Awards recognise that at the moment, mobile phones are surpassing all other media in terms of penetration in the region: TV, radio, Internet, newspapers, magazines and   landlines. Mobile platforms are becoming the natural choice for smashing the information barrier and extending essential and innovative digital services to the broadest section of the population.

The awards, therefore, seek to not only reward all those who are taking initiatives to bridge the digital divide, empower people and bring about greater socio-economic equality but also create an ecosystem and network of such innovators and developers so that they can learn from each other, collaborate and scale up.

To recognise and honour excellence in mobile communications across South Asia.

To make the mBillionth Award South Asia the most influential and leading platform to explore, recognise and honour excellence in mobile innovations, applications and content services for development and empowerment across South Asia.