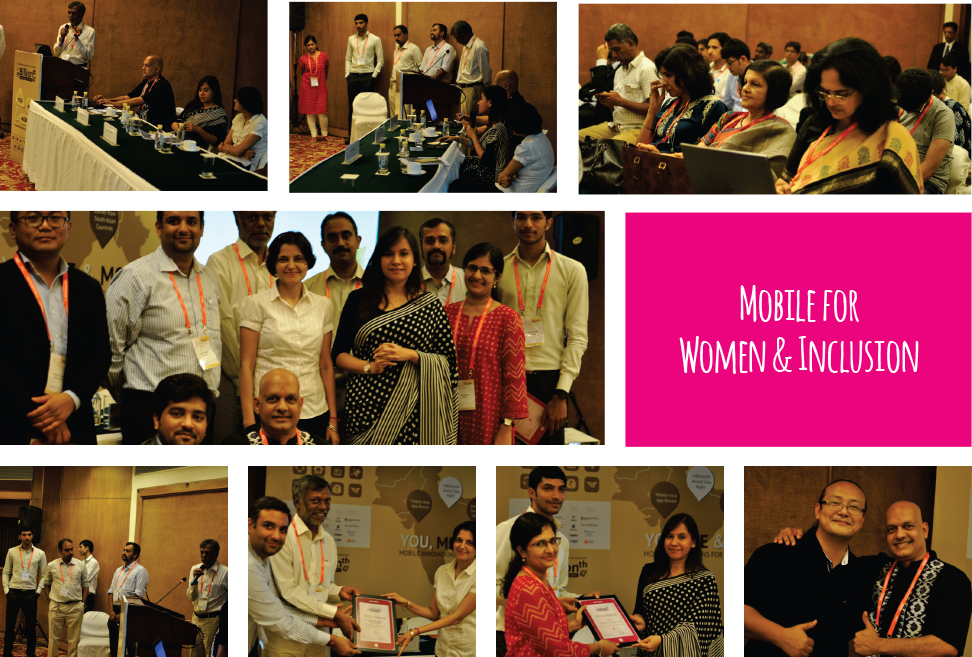 Madanmohan Rao moderated the session on ‘Mobile for women and inclusion’.In his introductory speech he mentioned about the importance of mobile and its usage in the development of the underprivileged.

Madhu Singh Sirohi chaired the session and expressed her views that mobile plays a transforming role in terms of safety, education and overall developmentof women. The number of apps that are coming forward will revolutionize the movement to empower women.
Sairee Chahal began her address by stressing on the fact that ‘Mobile is a life-changing medium.’ She substantiated her statement by narrating a self-learning story of her mother who is not computer savvy but is mobile literate. With the advent of mobile technology she has now has infinite access to the Internet and user friendly applications.

Madanmohan Rao invited the presenters and explained the rules to carry out the presentation.

The first presentation was by George Hauhnar, Assistant Manager – Business Development, Indianeye Security. The name of the application is ‘Eyewatch’. It is a personal safety mobile phone application and has been designed after consultation with experts from Europe and USA. The system is designed in a unique way so that it can be integrated with an emergency response control centre (ERCC). Hauhnar mentioned that the application has already been launched in various places such as Nasik, Nagpur, Kolkata, Amravati and Belgaum.
After the presentation, several questions came from the audience. One of the questions was to know the parameters set forward before launching the application. George explained that there were two parameters for selection. One was based on population of the city and the other was cooperation with police and corporates.

The second presentation was given by Chitra Nair from UST GLOBAL. She spoke about the application ‘Isafe’ which is a mobile phone application made for the residents of Thiruvananthapuram city. It enables an individual to alert the local police when one is in danger. With the help of a panic button one can send location, IMEI number and subscriber ID to the Police Control Room so that the police can locate the exact location of the needy.

In the open floor session, there was a question about time lapse and personal identity sharing. To this Chitra explained that volume key button is enabled for easy access and once the location is shared with the police the message is not stored in any database.
The next presentation was given by Sunil. J. Mathew, Lead Entrepreneur, Sightica Solutions Pvt Ltd. and before beginning with the presentation he mentioned that the application‘Netradaan’ was developed by a visually impaired app developer. The concept of this application revolves around donating and receiving eyes easily. This application is India’s first Eye/Cornea Donation android app and was launched in April 2015. It saw a whooping response as 50+ applications have been submitted for eye donation.
Sunil further answered the questions that came forward from the audiences about the priority given to the receiver. He mentioned that they have tied up with the Eye Bank Association of India (EBAI) and in the case of priority, the nearest receiver will get the benefit and is also based on first come first served.

The final presentation was given by Nicholas George, CEO, GreenClouds Education Solutions. He presented web accessibility testing tool for people with disabilities to understand, navigate and use the Web. It also enables websites to be accessible on any device including mobile phones and tablets.

After the presentations were over, Madanmohan Rao asked the participants about the difficulties they faced while preparing the application. Each of the presenters gave different answers. Nicholas George said that there is lack of awareness among masses about web accessibility tools. Sunil J. Mathew described the time crunch they faced during the preparation, as the team of ‘Netrdaan’ worked for other projects also. Chitra Nair said that they faced problems during the implementation process as it was difficult to coordinate with the police and the public. George Hauhnar added that sometimes it gets difficult to convince people that apps do help in saving lives.
The panelists gave certificates to the respective presenters and the session concluded with a group photo.