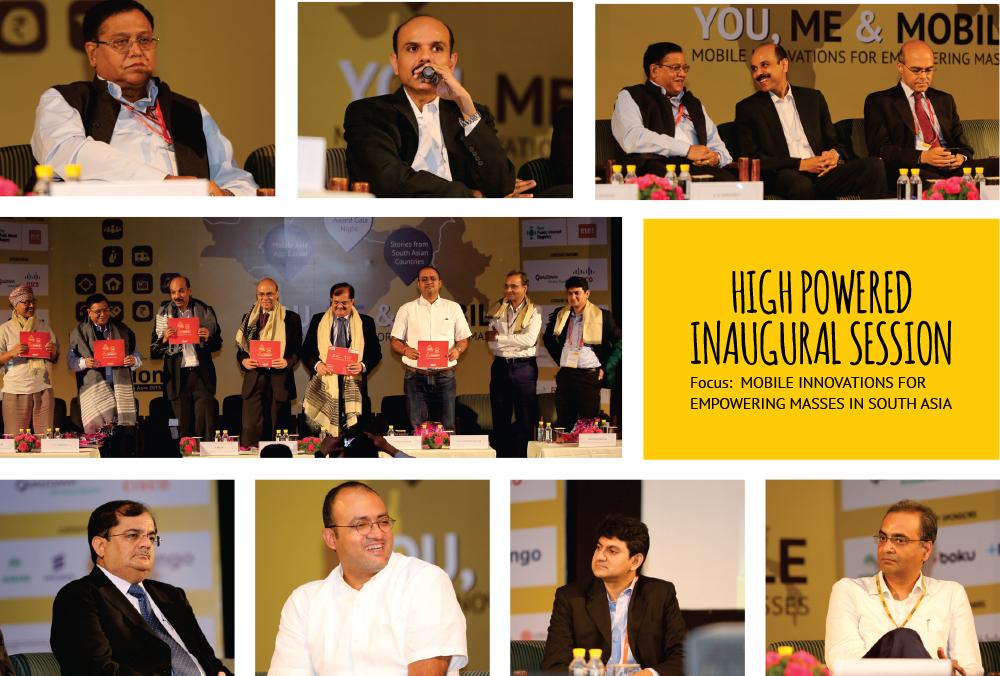 The 6th mBillionth Award 2015 was kick-started by a high-powered inaugural session on July 23, 2015. The award salutes mobile-based innovations for development and, this year, mBillionth received 320 nominations in 11 categories from eight countries. Out of these, the Grand Jury selected 53 finalists and 24 winners.

The Founder-Director of Digital Empowerment Foundation, Mr. Osama Manzar, thanked the Jury for their dedicated and welcomed the audience, explaining this year’s focus of the award: ‘Mobile Innovations for Empowering Masses in South Asia’.

Over the last six years, mBillionth has created a repository of over 2,000 innovations and given people “an opportunity to interact with innovators, entrepreneurs and government officials at a personal level”, said Mr. Manzar at Stein Auditorium of India Habitat Centre, New Delhi.

“Today, innovations in technology are being led by mobile phones, a device that is enabling last mile connectivity in India,” he said before two short films were screened for the audience on the journey of mBillionth Awards and the 2015 Jury, respectively.

There seemed to be a consensus among the Jury over the fact that mBillionth has become the gateway to making people richer and more informed and, at the same time, the awards encourage people to go on to do better things.

Encouraging the idea of ‘neighbour first’, Mr. Manzar invited Mr. Chowdhury, who hails from Bangladesh, to take the dais first.

“Bangladesh has been going through mobile revolution and this is because of the high population density in the country. What helps this revolution is Bangladesh’s flat land, which ensures good connectivity at low cost, and the incumbent government that is gung-ho about ‘Digital Bangla’,” said Mr. Chowdhury.

“About 70 per cent of women have no access to mobile phones. This is a cultural issue. A woman is always the last to get anything in the house, be it food or a mobile phone. If a woman is given a mobile phone and Internet connection, she can drive a change in the society,” Mr. Ranganathan said. For this purpose, the government’s ambitious fixed-line broadband connectivity vision can be very helpful, he added.

However, it’s not an easy task to take the Internet to every individual of the country.

Mr. Kar agreed that the Internet has the power to bring about a change but the cost of taking the Internet to every corner of the country is very high. Yet, Qualcomm has been trying to bridge this gap for the last 30 years.

“Several years ago, Qualcomm started its wireless reach initiative. It wasn’t a ‘CSR project’ but a step towards reaching rural India,” Mr. Kar said, adding that they have helped fishermen in Andhra Pradesh and Tamil Nadu improve their livelihood by getting access to information on prices, market and even international boundary alerts on their mobile phones.

“Vodafone doesn’t only reach the smartphone users but also those who use feature phones — through an SMS approach. Vodafone has reached 600-650 million unique users in India but we’ve faced a lot of obstacles in this journey. Policies have been one of the major obstacles,” said Mr. Balaji. However, that has not stopped Vodafone from mobilising a change and making a difference in the society. Mobile for Good and the Red Rickshaw Revolution are evidence of that.

The evidence of the government’s efforts towards reaching each individual is in its MyGov initiative, explained Mr. Dwivedi.

“It is a medium of large-scale connectivity between individuals and their government though radio, print, electronic and social media,” he said.

Earlier, people could only blame the government while discussing the issue in their living room. Today, each citizen has the option to raise its issues directly with the government. Earlier, the government invited suggestions and grievances through its Facebook and response forms on websites. However, how many of those feedbacks actually got a reply from the government? MyGov is looking to change that,” Mr. Dwivedi added.
MyGov has connected 36 ministries and hopes to connect each and every individual now. “Each one of us forms the government. MyGov, like the government of India, cannot function if each one of us is not a part of it,” he stated.

Taking forward the government’s Digital India vision, Mr. Saraswat emphasised on the need for better Internet penetration and connectivity. “We’ve not been able to provide the last mile connectivity but mobile phone can change that,” he said.

“Technology demands are growing by 40 per cent each year. Data demand is high today and it will only grow in the years to come. At the same time, data storage space will also need to be increased. Thus, cloud computing is very important,” Mr. Saraswat said, adding that earlier innovation in technology were computer and Internet centric but today, they’re human centric, thanks to mobile phones.

However, though there is a high dependence on mobile phones today, the Indian mobile industry is largely based on international market and imported components. “The government’s Make in India campaign can change the scenario. We need to establish design houses and component-manufacturing factories in India,” he stated.

On this note, the session was opened for a Q&A round during which several interesting questions and views were raised. One key point raised during this session was that though the government promotes use of mobile phones, there is no electricity in villages to charge phones. Mr Saraswat agreed to this shortcoming and stated, “The government cannot only develop an app but also needs to develop infrastructure to ensure its sustenance and increase its penetration.”

Meanwhile, National Skill Development Corporation COO Mr. Atul Bhatnagar, who joined the panel on stage during the Q&A round, explained the power of mobile phones with a simple fact: “There are 300 million Internet users but 900 million mobile users”. Mr. Bhatrnagar is heading the government’s mission of creating jobs for 15 crore individuals.

After about a dozen questions and their replies, time constraint brought Q&A to an end to allow the panel to inaugurate this year’s mBillionth Award book, ‘You, Me & Mobile’.

‘You, Me & Mobile” is a compilation of profiles of the 53 finalists and provides a snapshot of its services.