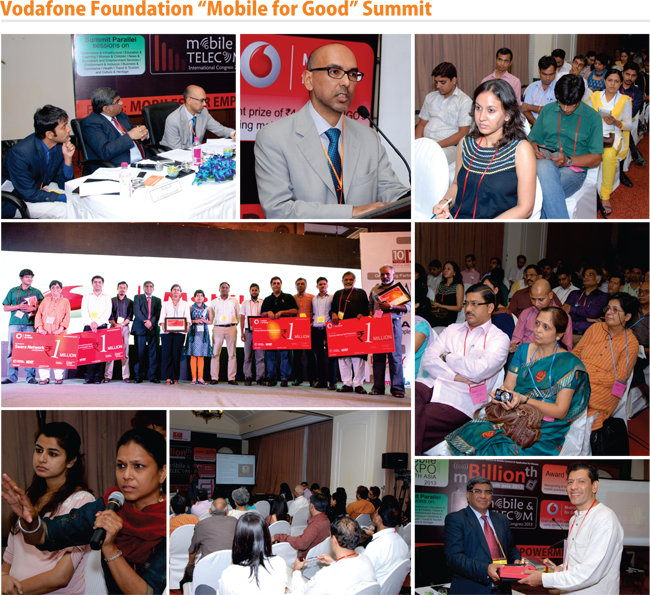 Objectives of the summit:

First presenter was Ms. Arti Jaiman. She talked about how The Radiophone Project brings learning material from Sesame Workshop India Trust, the television program and now radio series, GalliGalliSimSim, to 40 government primary schools in Gurgaon via internet streaming accessed on smartphones managed by teachers. The School Program of the Radiophone Project specifically reaches out to the migrant workers’ children who study in government schools of Gurgaon. Children routinely call into the program via the phones in their classrooms to share their experiences, or just enjoy the empowering feeling of getting their voices on air.

Next presenter was Ms. Sapna Moudgil. She talks about working with the urban youth in an energetic way, thus training them and getting them employed. They got the faculty into content creation and got the students more interested in learning through mobile learning. They put up a server which has all the content uploaded, and every faculty member has a mobile phone in the classroom which is connected to server, determining what to download and upload from and to the server, and also customising it. They enabled real time quizzing and learning through this kind of mobile learning, thus giving the teacher an exact idea of what every student is doing and how much help he needs. This has attracted a lot of girls to come and study in such centres.

Next speaker was Mr. Dipak Tatpuje.  He talks about mobile applications related to technology entrepreneurship to empower the youth which consists of a huge number of drop outs. They have developed a lot of such courses, which consists of scientific activities, experiential, interactive and collaborative learning. The apps that cater to such kind of learning are integrated with print material and multimedia CD’s. Digital material is made available in English as well as in regional language. Classroom training is supported and also mentors and groups help support the youth to start this enterprise. Post training support is also provided. They also have cloud storage, thus making it more interactive and compatible with other gadgets.

Next presentation was given by Arjun Venkatraman.  He talks about their project, Swara Network, which started as a mailing list, and now also includes the IVR technology to include people from the grassroots. All this content goes back on the internet, to the mailing lists, and back to the IVR as well. It allows people to take actions about real life situations and get fast results. All the recordings get pushed on to an email address, to the mailing list, thus expanding the moderating process. This allows the communities to contribute back to this content that is recorded. This results in an increase in the number of stories that can actually create an impact. These impact stories have been more effective in areas with poor rail network connectivity and other networks and connectivity.

Next presentation was given by Pankti Jog. She talked about the RTI act and how it could be taken to the grassroot level, to people who are not even literate, who end up bribing other people, who are not even aware about the RTI act. This is where the idea of mobile RTI clinic came in. It started with a mobile helpline, where people get assisted while filing RTI applications. Also, the RTI wheels were created with a multimedia van along with a helpline and RTI library. It goes to villages and other rural places and spreads information about the RTI act in detail which is available to the digital world. IT also listens to these people’s grievances and helps them with it. This reduced a lot of corruption and got a lot of questions and grievances addressed. It started in Gujarat, and now spans across various states and cities of the country.

Next presentation was given by Vikram Krishna. He talked about a project from the collective ChaloBEST, which uses mobiles to be more mobile and commute easily. It provides very accurate information obtained from the internet service provider. IT allows people to access this app on mobiles to provide information about routes and bus destinations. The minimum access cost as of now is 1 rupee. It is the interface that makes it possible to get public feedback for continuous improvement. Also, it is a scalable, replicable, and open source system.

Next presentation was given by Rajendra Negi. The speaker talked about a Community radio show in Uttarakhand, which is for the common people. The local youth came up with a way to build low cost radio stations and a way to deal with the repair work of the equipment for this programme. They gradually started building programs on various issues to bring them to the eyes of the public. And mobile really helped get rid of the communication gap. Even in recent times, they had started alerting the nearby regions in Uttarakhand one week before the onset of disaster. They handle numerous emergency calls, leading the way to people who were stuck somewhere. Thus, it was a really good platform for information sharing.

Next presentation was given by K. Rajasheker. He talked about developing mobile applications from the existing infrastructure, using an ordinary mobile phone. The Aanganwaadi centres give a lot of health care services to children and women there. They are given free sims and mobile services in return for sending back daily messages and updates to the government. They have empowered them to acquire the required amount of food, that also through mobile applications. They are now looking for low cost service providers for them so that data is regulated easily.

Next presentation was given by Dr. Hilmi Quraishi. He talks about ZMQ as a social enterprise, which is divided into two parts. Through this project through mobile, they aimed at creating virtualised women networks, by identifying self-help groups, and created a worldwide platform, which caters to the needs of the women. On this single channel, all the basic needs and healthcare tools can be provided to women, along with gaming and self-empowerment opportunities, etc. Thus, the basic objective is to make mobiles more gender neutral, so that we can establish permanent connectivity with these people to provide them with permanent lifeline services.

Next presentation was given by Dr. Sandhya Ramalingam. She talked about Arogya’s mission of preventing diabetes by bringing about a social impact and behaviour change. Their core program uses Nokia’s live tools platform to send text messages to the consumers. These messages were created by scientific and behaviour change experts to decide what content will be relevant for India. They are tracking the results through Nokia’s database and are expecting the research to be completed by next month. But they seem hopeful about the results. They are looking forward to expanding their base with other mobile network providers and affect a larger number of people.

Next presentation was given by Rajesh Shah. He talks about arsenic poisoning and how many lives it has claimed throughout the years. A large number of population in India practises open defecation which results in more human pathogens being released into the whole water cycle. There is a dearth of safe drinking water. There are a lot of prevalent illnesses all around. Thus, to reduce this, all of human excreta must be treated. And all these sanitation processes have to be changed, and have to be collaborative and transparent. This, they achieve by mobile technology. There are regular reports being sent through SMSs and actions being taken and current status of each one of these situations.

Next presentation was given by Dr. Kanav Kahol. The speaker talked about the device Swasthya Slate, which allows you to do diagnostics tests of 33 diseases through a mobile phone. And the cost is just 50 rupees. They provide kits to people as well for the tests. There is a whole analytical system which has been built up which tries to monitor the health of every individual. It has a laid out decision support system which allows the frontline health workers to identify 60 symptoms and 11 chronic care health problems.

Next presentation was given by Radha Rani Mitra. She talked about two mobile applications launched for the state of Bihar. They increased the abilities of the frontline health workers, aiming at scale and sustainability using appropriate technology. The first service, Mobile Academy, is an IVR based service, through which they covered a lot of content starting from the pregnancy period to when the child is 2 years old.She talked about her company’s work where they use a 360 degree integrated approach to reach its rural population, which is 90% of the total population. One of their major platform enablers are the frontline health workers. They came up with solutions to increase the FLWs’ efficacy without increasing their workload, the first solution being an anytime, anywhere paid course, ‘Mobile Academy’. It focuses on enhancing communication skills and refreshing acquired knowledge. It is accessible from any mobile handset, including 5 leading network operators of the country. The second solution they came up with was ‘Mobile Kunji’, enabling them to talk to families in the community. It is a deck of cards on a ring, each having a large illustration on the front which delivers key health information, thus guiding the communication between the FLWs and their women. Every card has a toll free number which can be dialled when needed and a doctor’s voice gives keynote information to the worker.

Next presentation was given by Infiniti Data Initiative. The speaker said that they looked at sectorial issues and worked on data. A lot of information flow is needed between the government and other institutions. They have access to this information and they want to enable it. They want people to look at interventions which are cross sectorial. It improves quality and reliability. They are working on housing-for-all program in India so that people can get access to better living conditions. They don’t build houses, but to establish a model which can scale. They also focus on nutrition and are also doing a lot of deep studies and surveys, trying to get to the root of the problem. And they want to establish the relationship between housing, nutrition and farming. Thus, they have built a technology platform enabling all this, and it is open source and has a mobile component as well.

Next presentation was given by Stan Thekaekara. He talks about working with the adivasis in a remote village in south India, fighting for their land rights, their healthcare, education and economic development. They have put up a hospital, a school, with researchers coming from the government and other places to collect information about their health and schooling, etc. And all this information is updated to the server through a mobile when there’s connectivity. Reminders about due check-ups are also sent through mobiles to them. Also, to overcome some hazards like data inaccuracy or data mismatch between the office servers and the tribal’s, every new update is uploaded on the server through phones with wifi. This ensures transparency. They have also provided every tribal with a unique ID card which allows all the information to be stored in one place, accessed by that ID, which gives them the power to choose who has the access to their data, ensuring data security and privacy.

Next presentation was given by Jitendra Sharma. They are running a community radio station which has agriculture as its main focus. They also started developing other programs which helped in better networking between communities. But they went one step further and made it a two way communication using mobile phones where farmers end up calling the radio stations and connect culturally. They are providing solutions to the problems of these farmers, besides the onset of an intermingled cultural community.

Mobiles and mobile computing pave the way for our future, leading to social, cultural, economic and educational breakthroughs.